Medical Breakthroughs We Can Thank Fruit Flies For 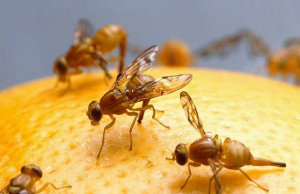 We all know them as those annoying pests that keep coming for your rotten fruits and vegetables, opened bottles of wine and sugary foods. However, as annoying and distressing these pests may be, there are some reasons we can thank them for.

‘Seriously? Saying thanks to fruit flies?’

This is what every restaurant or bar owner probably thinks at this point. But when it comes to humanity in general, fruit flies are just another part of the life chain – and a possible breakthrough in the battle against cancer.

The Thing That Made Fruit Flies A Major Health Discovery

Many people thought fruit flies were nothing but a strain of pests that annoy and transfer bacteria. They have been among the biggest problems for restaurant and bar owners as well, and a major issue in most supermarkets and large stores selling open-air foods.

Due to this invasion of fruit flies and their amazingly fast reproduction rate, this pest has become a subject of research over the past decades. Little did the scientists know that this specific fly – can actually help them come closer to a major breakthrough in medicine.

Wondering what? Well, here is the story…

Although not directly related to health, fruit flies are known to have a mechanism that is known as wound-induced polyploidy (WIP). This mechanism actually helps them heal themselves and enlarges the existing cells to maintain the size and the functional capacity of all the injured tissues on their skin.

Because of the great deal of genes that fruit flies share with humans, they offer labs and scientists a variety of possibilities in studying them and how they can potentially heal the human body of any injuries or diseases.

Fruit Flies As A Potential Cure For Cancer

As unbelievable as this may sound, fruit flies have a lot in common with people. That is why they have been used in the battle against cancer as the research organism that is able to regenerate cells and one that shares a great deal of human disease genes.

The cancer research with fruit flies started in 1967, with the discovery of the first gene that humans and these pests share – the tumor suppressor gene that prevents cells from becoming cancerous. The malfunctions of the hedgehog or porcupine genes found in fruit flies and the notch genes in humans, are linked to cancers of the blood, breast, intestine, skin and brain.

Aside from cancer, the list of genetic similarities between humans and fruit flies goes on and on, leading to many interesting developments – one of which is the drug screening process. The scientific researches and tests even got a name – Drosophila – as the ultimate process of identifying new genes shared by both flies and humans.

When it comes to drug screening, the fly cells filter out cells that would have harmful side effects in the whole organism or ones that are poorly absorbed in the intestine, or degraded during digestion. This is another breakthrough in the drug development research.

A Final Word: Fruit Flies As A Major Breakthrough In Medicine

The discussions about Drosophila as the name of the research and identification of new genes have also made headlines in a number of occasions. In 2008, Sarah Palin (a candidate for US vice-president) dismissed research in fruit flies, blaming them for spending too much tax money. However, the breakthroughs in medicine were still a hot topic – one that US Senator Rand Paul also considered helpful with his use of fly research into sex and the aging process.

The point is, the average fruit fly has a lot to offer for science. Who knows, maybe a potential discovery and a medical breakthrough as a cure for cancer?

Until then, let’s make sure to keep them from spreading harmful bacteria into our homes and restaurants – with the Fruit Fly BarPro.